Graduated from the University of Notre Dame in 1971, Mark Mahoney received his law degree in 1974 from the State University of New York Law School at Buffalo. Beginning with the firm of Doyle, Diebold & Bermingham and up to the present time with his firm of Harrington & Mahoney, he has always engaged in the private practice of criminal law. Mark is admitted to practice in all New York courts and the Supreme Court of the United States. He is one of the few attorneys admitted to practice in all four federal district courts in New York.

Mark Mahoney is the only attorney in North America, and perhaps the world, dedicating his practice almost exclusively to the repesentation of those with Autism Spectrum Disorder/Asperger's Syndrome. The top  lawyers across the county who have teamed up with Mark in defending these cases include 8 past presidents of the NACDL.

Litigation Milestones
Since the early 1980's Mark was among a handful of top criminal trial lawyers in Western New York. Among his numerous felony jury trials, many of which were conducted as assigned counsel, the best known are the trials of Daniel Morrison, publicity director of the Irish political party, Sinn Fein, Joseph Christopher, the ".22 Cal. Killer" and the recent "Adelphia" case.
Mark, along with the late Supreme Court Justice Kevin M. Dillon, was appointed in 1981 to represent Joseph Christopher. Christopher, an Army private then in Fort Benning, was known here as the ".22 Caliber Killer" and in New York City as the "Midtown Slasher." Arising out of the murders of 11 black- and brown-skinned persons in Buffalo and New York City in 1980, the investigation leading up to the highly publicized trial remains the largest in upstate New York history. In the Christopher case, before the IBM PC was available, Mark introduced the use of mini-computer technology for the organization of thousands of documents and events, and hundreds of witnesses.
Daniel Morrison, publicity chairperson for Sinn Fein, and Owen Carron, the elected member of the Irish Parliament who had replaced the late Bobby Sands, were tried in Federal Court on charges arising out of their attempt to enter the United States in January of 1982 to express their views about the situation in Northern Ireland and to protest the history of restrictions on the issuance of visas to Irish Republicans. Though convicted, Morrison and Carron, who was represented by James Harrington, were not sentenced to jail.
Mark has defended at trial a wide range of political activists representing peace and nuclear disarmament movements, artists ("Artpark 18"), environmental protectionists and, more recently, Critical Mass participants in a two week trial in Buffalo City Court in 2003. His longest trial was in the "Adelphia" case (United States v. John Rigas, et al.), tried for six months in 2004 in federal court in New York City, the largest criminal case in the country to reach a verdict that year, and described as the largest accounting fraud case in history. His client, the former Assistant Treasurer for Adelphia, was the only defendant to be acquitted. No other criminal defense lawyer based in Buffalo has tried such a large criminal case in Manhattan, or won it, since the famous Frank Raichle, several decades ago.
More recently he obtained an acquittal for the Business Agent of Local 17 of the Operating Engineers after a 6 year battle with the government and a two month trial on extortion charges related to labor organization activities.

Firsts
In 1986 Mr. Mahoney obtained the reversal on appeal of the conviction of Dr. Heinz Golitschek, the Austrian who was extradited from Canada to the United States and then convicted on charges of attempting to smuggle $60 million worth of military helicopters to Iran. This was the first case in the country where the "Iran-Contra" scandal was raised to attack a criminal conviction, and Mark set important precedent that, in international crimes, an accused is not "presumed to know the law" of some other country.
Mr. Mahoney was the first in a case involving infanticide to raise the existence of the "battered child syndrome" to successfully avoid a murder conviction, in the trial in Buffalo of Stanley Zamiela, in 1981. In January of 1988, in rural Fulton County, New York, exposing the "battered spouse syndrome," through expert witness Dr. Charles Ewing, he obtained the first complete acquittal in a case of this kind in New York State.
He was the first to introduce a computer simulation in a criminal case in New York, and possibly the entire nation, in his successful 1989 defense of truck driver Antonino Schepis accused in a horrific multi-fatality tractor-trailer rollover collision. The extensive pretrial investigation of the vehicle and the roadway design, together with the powerful computer simulation, not only resulted in the acquittal of the driver, but also the demonstration that the accident resulted in part because of the way the trailer was loaded by another company which, as a result, would later contribute substantially to the multi-million dollar civil settlement.
In that same year Mark successfully defended Tony Guilford, a Buffalo fireman accused of attempted murder of a police officer. Guilford claimed that he acted in self defense when he shot and critically wounded police officers executing a search warrant at his home, believing that they were burglars. Scouring of the 16 track "911" tapes, the defense uncovered a call by the defendant's girlfriend to the police in which background voices could be heard. Using newly available digital enhancement technology together with emerging voiceprint technology provided sufficient support for the defendant's version of the events that he was an acquittal of all charges.
On behalf of the National Association of Criminal Defense Lawyers Mr. Mahoney authored the successful amicus curiae brief in People v. Bigelow, the landmark New York Court of Appeals case in 1985 which foreclosed the use of the "Good Faith" exception to the exclusionary rule in New York and which has been followed extensively in other jurisdictions. Mr. Mahoney's brief was the only one submitted in the case advancing the arguments accepted by the Court of Appeals.

Mark was the first defense attorney to avoid prison and sex offender registration for an individual with autism charged with possession of child pornography.

Publications
In 1994 West Publishing Co., the largest legal publisher in the United States, announced the release of Mark Mahoney's "New York Criminal Defense Motions," an electronic publication of hundreds of motions, forms, and memoranda for use by criminal practitioners. This publication grew out of Mr. Mahoney's "Whole Motion Catalog", a widely circulated motion practice manual for criminal defense attorneys in New York State.

Mr. Mahoney's publications include a chapter in the book The Y Chromosome, entitled "XYY: Science and the Development of the Criminal Law." The book is edited by Dr. Avery Sandberg who had discovered the XYY Syndrome.
He is a contributing author in the leading publication on criminal practice in New York, published by the New York State Bar Association, "New York Criminal Practice." The chapters authored by Mr. Mahoney are on motion practice and jury instructions, the latter being unusual because of its emphasis on the use of psycholinguistic research to make jury instructions comprehensible to jurors.
His monograph entitled "The Right to Present a Defense" has been widely distributed to criminal defense lawyers since 1980 throughout the country and is the only current publication exhaustively explicating this important constitutional principle.
With the reintroduction of the death penalty in New York, Mr. Mahoney has been certified by the Capital Defender Office, he and his partner, James Harrington have been appointed to represent defendants in capital cases. He authored the monograph entitled "A Schedule of Fees for Capital Defense" whose recommendations for rates of compensation for capital defense lawyers were approved by the Court of Appeals. At the request of the Capital Defender Office he prepared a set of proposed death penalty jury instructions for the Criminal Jury Instructions Committee of the New York Office of Court Administration, and has coauthored, with Dr. Rosalyn Lindner, one of the original members of the National Jury Project, "Jury Selection in Capital Cases: New York,"a manual for the training and guidance of lawyers regarding jury selection in capital cases which was also subsequently incorporated into the California Death Penalty Defense Manual.
Having gotten involved in the defense of a young man with Asperger's Syndrome charged criminally for viewing child pornography in federal court, Mark intensively researched the field, contacting the leading experts in the nation, and prepared position paper for a large number of Autism and Asperger's advocacy groups urging prosecutors to forgo criminal prosecution in these circumstances. His article, “Asperger’s Syndrome and the Criminal Law: The Special Case of Child Pornography,”   the first source on the Web or elsewhere exposing the inappropriateness of scapegoating this population under the extremely harsh federal and state child pornography and sex offender registration statutes. The circulation of his article, and the information it has provided to clinicians, defense lawyers, families, prosecutors and judges has resulted in a number of extraordinary results in these cases.
As a result, Mark has become the most prominent and experienced attorney in the country involved in defending person with Autism Spectrum Disorder, especially known as Asperger’s Syndrome, who, by virtue of this pervasive developmental disability, are completely unaware of importatn social and legal taboos and get accused of a wide range of online and offline behavior. Mark Mahoney is now almost exclisively expending  his professional time helping these individuals and their families caught in the nightmare of a criminal prosecution.

To see some of these and other publications by Mark Mahoney, go his "Publications" page.

Personal background
At Notre Dame Mark studied in the "Program of Liberal Studies" - a "Great Books" major - and also took several courses through Notre Dame's "Program for the Study of Christian Nonviolence." His legal career actually began there as a Military and Draft counselor trained by the Central Committee for Conscientious Objectors, and then defending himself in two proceedings brought by the university. First, after participating in an anti-war protest he was among ten students suspended and expelled from the university—the first and last time anyone was suspended from Notre Dame for political/moral protesting. As a member of what was then called "The Notre Dame Ten," he was part of the "defense team" for the group of students, under the guidance of then professor, but now priest, Fr. Emmanuel Charles McCarthy, a Nobel Peace Prize nominee and the leading educator today in the study and practice of Christian Nonviolence.
Additionally Mark was a defendant in an injunction action brought by the University of Notre Dame, to keep him and his associates from assembling near its famous "Golden Dome," the location where the protest had been held resulting in his suspension.  Despite the loss of this fall semester of his junior year, Mark graduated with his class, in 1971, on the Dean’s List and as a Resident Assistant in one of the largest residence halls.

On graduation from the Buffalo Law School in 1974, Mark was chosen as the Valedictorian of his class.

Family and Activities
Mark is the father of Margaret Frances (Maggie), a graduate of Lewis Clark College, who is now a graduate student at Tulane University, and Katharine Clare (Kitty), who atttended the University of Virginia as a member of its rowing team, and who is now attending the Willowbank School for Preservation Arts, in Queenstown, Ontario.
Mark is active as a cyclist (road, cyclocross), runner, distance swimmer, wilderness canoeist, whitewater and flatwater kayaker; "recovering" triathlete, roller-blader, tennis player, marathon XC skier and Alpine and “back country” skier. He was a founding member of Amnesty International Group #104; previously he was the Chair of the Erie County Youth Services Board and a Leader, from 1968-1973, at Camp Dudley YMCA, Westport, NY. Mark was one of eight canoeists featured in the made-for-TV film "On to the Polar Sea: A Yukon Adventure." The film, produced by Turner Broadcasting and filmed in 1983, was a documentary of a 350-mile trip down the Bonnet Plume, Peel and Mackenzie Rivers with the late Assemblyman Bill Hoyt and former SUNY Chancellor D. Bruce Johnstone, among others. 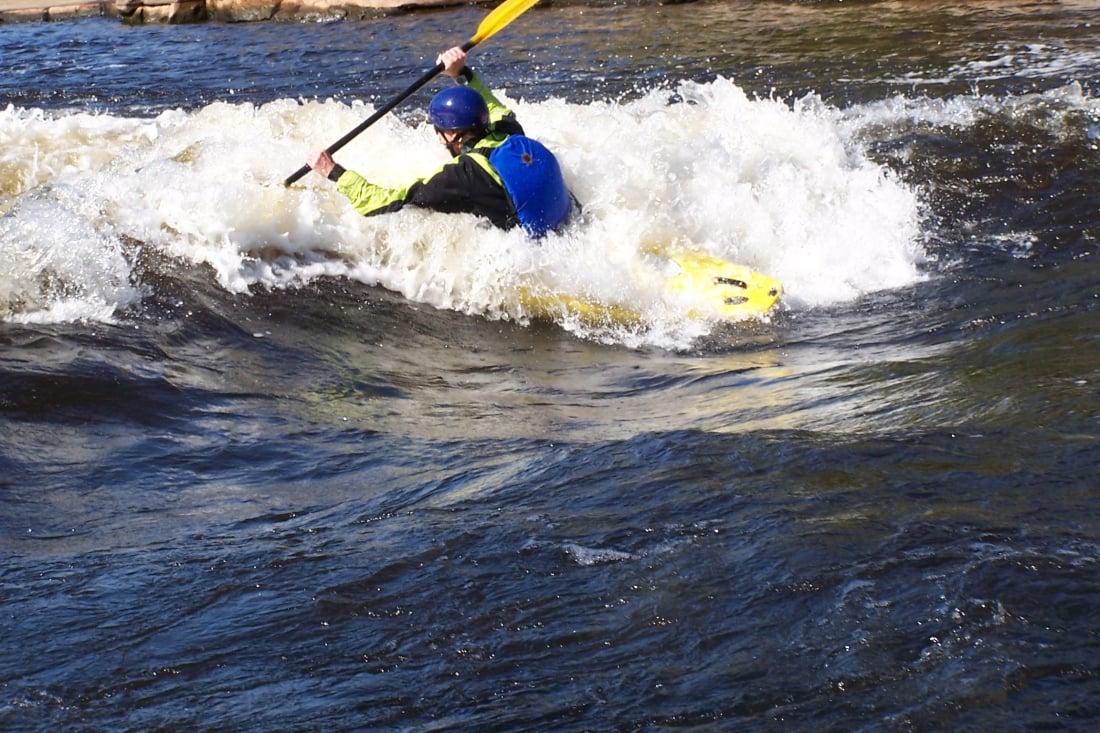